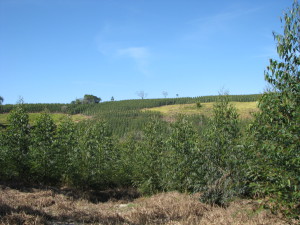 The forest of Romania formed now more than 10 000 years ago. It represented then 80 % of the surface of the country. Today, we estimate its rate of afforestation approximately at 27 %, the European average being 36 %. Indeed, in the 1990s, the impact of the man on the Rumanian forests was unprecedented. That is why, from now on, since the 2000s, the management and the exploitation of the Rumanian forests is very regulated.

The choice of the forest of Romania by SLB.

Coming from a family specializing in wood since three generations, or 80 years of forestry experience, Stéphane Ledentu decides to create his company in 1991. Based in France in Torigni-sur-Vire, Normandy, SLB company is specialized in logging and wood trading, FSC and PEFC certified. Quickly, the company is turning to the formation of forest groupings to secure the supply more than it was already, via contracting.

Beyond securing wood supply, forest groupings are also intended, and especially, to save “the lung of the world” formed by the forest. Naturally, this led Stéphane Ledentu to combine ecology and economy : the Econology, concept still little known.

The Econology is a concept coming from Canada in the 90s when the awareness of the impact of the human activities on the ecosystem emerged. Unheralded at the moment, it is, for several years, in the heart of the actions of the SLB Group managed by Stéphane Ledentu.

This concept intends to demonstrate that it is possible to ally the economy and the ecology, and so, to participate in the economic development of a country, a company or a heritage while protecting the environment with the possibility of decreasing the impact of the human activities on the nature. The forest growth is thus consistent with the financial growth.

It is in the 90s, when Stéphane Ledentu exports some wood towards the Asian countries that he becomes aware that, in front of progressive development of these countries and increase of the demands, forests never went hold the shock in front of such needs.

Bearing in mind these circumstances, Stéphane Ledentu decides to spread his acquisition and forest groupings offer in Europe, in particular in Romania, by creating the brand Eastern Forest in 2007. To do this, he is surrounded with a team of passionate professionals, as him, and completely dedicated to the support of projects in France and in Romania.

Eastern Forest was created in 2007 in order to expand its forestry groups initial performance base in the Eastern Europe and, in particular, in Romania. The team in charge of this program assists and coordinates all the actors of the sector. The acquisition is uncut for species such as Charm, Oak, Beech or still Ash tree (not exhaustive list). In every stages of its development, the Rumanian wood finds various high value-added outlets. Indeed, it can be used as well as firewood, as raw material for furnishing manufacturing, or for building. As part of FSC, Eastern Forest is certified for the traceability of products stemming from forests managed durably.

All the stages are mastered by Eastern Forest and its collaborators : species purchase, forest management, selection and logging bound for the international market. It is a professional team which accompanies you in your project. It is thus a professional team which accompanies you in your project, and makes you benefit from its know-how. In addition, all the proposed forests are overseen by Rumanian and French SLB Group legal experts, in order to validate every stage of your project. To date, 3 200 forests hectares are managed in Romania. Eastern Forest is acting for the balance between flora and fauna, and then contributes to the natural regeneration of forests.

The various certifications of SLB Group allow to give evidence that the sustainable development and the environment are at the heart of its concerns. Through its econological programs, SLB Group transmits its know-how, its values and convictions as for the conservation and for the regeneration of the environment.

Supporting these projects, it is to become an actor of sustainable future, both economically and ecologically.