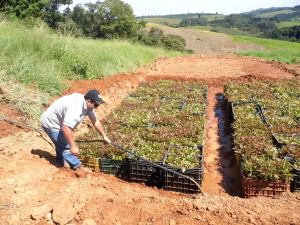 The ecology is a term invented in 1966 by the German biologist Ernst Haeckel to name the scientific study of the relations between living beings and their environment. It is a very general theme which includes a number of subjects of studies, as animals, microorganisms, humanity or housing environment.

Nowadays, the term ecology is generally used to define the relations between the current societies and their environment.

Of this science, that is the ecology, also emerged the notion of sustainable development which joins in a will of satisfaction of the current needs, without compromising those of the future generations. In this spirit, from now on several years, humanity demonstrates its ecological commitment, in the second sense of the term, whether it is at the world or national level, by new regulations, meetings of leaders ; either at the local level, by simple gestures registered in the mores.

In spite of all these concerted and individual actions, the growing industrialization of our countries increases little by little the impact of the human activity on the ecosystem.

The emergence of Econology concept.

It is on the basis of the growing human activity, impacting strongly on our ecosystem, that the concept of Econology was created in the 1990s. Indeed, it is at that time that appears a general, even world awareness, concerning the impact of the man and his activity on the environment. From then on, a reflection has been engaged so as to reconcile the economic growth, while avoiding the negative impact which the human activity could have on the environment. It is in Canada where the concept of Econology emerges for the first time in the 1990s. Nowadays, it is what we can consider as the ” good ecology “.

This concept can be declined under several forms and actions by a lot of persons or institutions, but it is under that of the alliance between the economic growth and the forest growth that Stéphane Ledentu, Chairman and Chief Executive Officer of SLB Group, decided to apply it.

The good ecology according to SLB.

On the basis of this assessment of increase of the logging for diverse needs, Stéphane Ledentu, strong supporter of the ecology, has decided to apply to his company this innovative concept that is the Econology, but also to make others benefit. Indeed, thanks to SLB, every person, physical or moral, has the possibility of becoming an actor of the good ecology.

Rocked since his earliest childhood in the field of wooden trade and logging, Stéphane Ledentu thus had a ringside seat in front of wooden growing needs for certain countries, noticing that the rhythm too much supported by the demand would never allow the forests to survive.

On the basis of this concept of Econology, SLB introduced several actions. So, two programs of reforestation and sustainable management of forests were set up : at first in Romania, via the Eastern Forest brand, then in Brazil, via SLB Do Brazil. These two countries were not chosen, naturally, accidentally. Indeed, both suffer largely, for several years, from a consequent environmental impoverishment in front of the growing economic activity of the man.

Thanks to its experiment and teams of passionate professionals, SLB proposes, through these two programs, the acquisition of farms for Brazil, and of forests for Romania, to compensate for carbon imprint emitted by your activity. To measure this imprint, SLB dispose of a tool adapted according to a methodology developed by the ADEME.

These two programs thus allow you to acquire forests according to the desired carbon compensation, with the aim of reducing your environmental impact. These forests are managed by the expert teams of SLB company, what insures a healthy and serene growth of various essences. In every stage of its development, and according to essences, the wood is exploited in various ways, by respecting a strict local regulations.

Based on Econology, SLB Group allows you to become an actor of the good ecology, so allying economic growth and forest growth, for a certain and long-lasting future.